Today, on the eve of Gamescom, HP revealed bold new OMEN hardware and mobile software innovations for gaming enthusiasts. The OMEN Obelisk, the latest addition to the desktop gaming family, will be one of the first systems to carry the NVIDIA® GeForce® RTX 20 Series of GPUs, giving gamers access to the world’s ultimate gaming architecture. OMEN Game Stream1 for Android will bring OMEN gaming experiences to mobile devices, for gamers looking to connect and play on the go.

In addition, HP unveiled new features that have been added to the OMEN Mindframe Headset – the world’s first headset with active earcup cooling technology –  to deliver added comfort and audio benefits for both competitive play and streaming.

“HP is focused on delivering incredible experiences that fuel the future of gaming and enable the community to perform at their best,” said Anne-Sophie Hadberg, head of Consumer Personal Systems EMEA, HP Inc. “Integrating the newly announced NVIDIA® GPUs and teaming up with HyperX® to provide high-performance memory for our OMEN Obelisk and future desktops demonstrates our commitment to building a world-class ecosystem comprised of the world’s best gaming solutions.”

OMEN Obelisk was designed to appeal to the do-it-yourself (DIY) crowd who traditionally won’t consider pre-built machines. Nearly two-thirds of performance gamers purchase devices that are easily upgradeable. Fifty-two percent choose a desktop PC, while another 12 percent of all performance gamers choose a DIY approach instead of purchasing from large OEMs2. With a DIY-friendly, industry-standard upgrade path, along with options for the latest graphics and processor architectures, gamers can achieve the performance they expect from games they love, now and well into the future.

“HyperX® is pleased to work with HP and provide HyperX® FURY memory in all upcoming and refreshed OMEN by HP gaming PCs,” said Mark Leathem, general manager, HyperX® Peripherals Division, when speaking to the memory integration. “With over fifteen years of experience delivering gaming memory, the HyperX® brand is a great fit with HP’s vision of providing exceptional PCs for gamers.”

OMEN Obelisk Desktop: Power to Train Hard and Game Harder
This newest addition to the family of OMEN Desktops has been engineered with peak performance and customization as central requirements, so your PC can keep up with the latest in gaming updates.

Top features of the OMEN Obelisk include:

OMEN Game Stream: OMEN Power on Your Android Device
OMEN Command Center continues to evolve as a centerpiece of the OMEN ecosystem. The OMEN Game Stream feature allows users to harness the power of their OMEN on other Windows 10 devices to play games on their big screen TV. The inclusion of Android functionality later this year to OMEN Game Stream adds an entirely new array of devices for gamers to stream6 their OMEN experience. OMEN Command Center comes preinstalled on all OMEN PCs and contains a variety of features, such as Network Booster and System Vitals. Additional customization and performance options are available on select OMEN laptops and desktops. OMEN Command Center also supports customization and settings adjustments for the latest accessories, such as the OMEN Sequencer Keyboard, OMEN Reactor Mouse and OMEN Mindframe Headset.

OMEN Mindframe Headset: Just as Cool, With New Enhancements
Announced in May, the forthcoming OMEN Mindframe Headset is the world’s first headset7 with active earcup cooling by way of HP’s patented thermoelectric driven Frostcap technology. The OMEN Mindframe headset has been built with comfort in mind, while also delivering amazing sound quality. Never settling, the OMEN by HP team has made further additions prior to launch, including:

OMEN by HP @ Gamescom
All announced products and software within the release and more will be at the OMEN stand A051/B050 in Hall 8 over the course of the convention.

OMEN by HP Pricing and Availability8 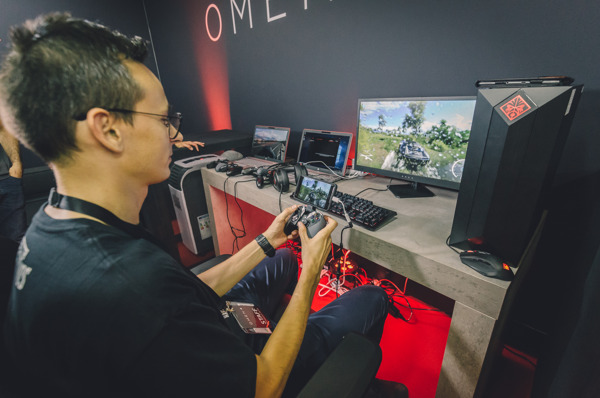